In the past couple of days since I announced the release of Icenium, I’ve had a number of people asking me if it supports Windows Phone in addition to Apple iOS and Google Android. I suppose that is because nearly all other Telerik products are dedicated to the Microsoft technology stack, so it would be almost expected that Icenium would get on the band-wagon.

Its All About the Data

Allow me to let data do the speaking: 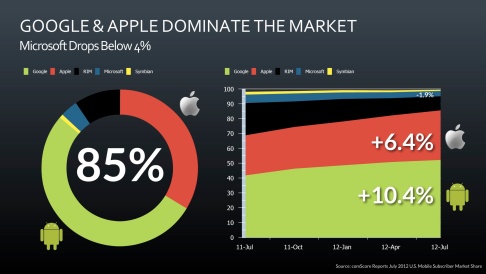 So I decided to focus our efforts on Apple and Google. Microsoft will have to wait.

What Will Windows Phone Do?

I used to be a Windows Phone user. I loved my Windows Phone (I missed a lot of the apps from my old iPhone, but I LOVED the operating system and the Live Tiles). In the last year I have regularly switched phones every month or two, trying out several Android devices in addition to the iPhone 4/4S and now iPhone 5. I’m a believer in Windows Phone – I think it is a great operating system. That is completely separate from the business decisions I make.

With Windows Phone 7 already on death row, and the success of Windows Phone 8 nothing more than speculation (like this and this), I didn’t feel like WIndows Phone warranted our time…yet. I am bullish on Windows Phone. Like I said, I love the OS and the new hardware is looking pretty good.

I have maintained a wait-and-see stance on adding Windows Phone support to Icenium.

Of course, Telerik has a lot of knowledge in Windows Phone, which means we’ve already done some research. We’ve done a proof-of-concept to learn more about what it would take to support Windows Phone, and we know what we need in order to give Windows Phone the Icenium treatment. We’ve already engaged Microsoft to work out some of the details, in the event we decide to move forward.

Over the next few weeks we’ll be watching the early adoption of Windows Phone to see what the consumer reaction is, and use that to make some decisions about how we prioritize our backlog for the remainder of the year, and early 2013.

OK, What About Windows 8?

Having worked on Windows 8 tooling before I left Microsoft, I feel like I know the app-type Formerly Known as Metro (FKM) pretty well. I’m curious to see how consumers and enterprises react to both the app-type and the new hardware. Clearly Windows 8 will be successful in the PC market – although I’m not sure how well PC users will take to the FKM style apps.

For the mobile device market, the success of the Surface with Windows RT (Surface RT) and the OEM tablet form factors will have a huge impact on the success of FKM apps on devices. If the hardware isn’t sexy, the Windows 8 tablet will suffer the same fate as Windows Phone 7.

If the Surface RT and its cousins do well with consumers (and even in the enterprise), then the FKM app-type has a shot, and it would make sense for Icenium to support it. The advantage we have is that FKM apps can be built with HTML and JavaScript, which work through a projection layer into the Windows Runtime (WinRT) – basically the exact same way Apache Cordova works (in concept), making adding FMK app support to Icenium very achievable.

Keep Your Fingers Crossed (and Buy a Surface RT)

I hope that helps you understand some of the decision making process I used for deciding what platforms to support in the initial offering of Icenium. We have aspirations to support all relevant platforms – and right now that definition excludes Windows 8 and Windows Phone 8. Let’s hope that changes.

I’d love to see a three-horse race in the mobile market.

12 thoughts on “What About Windows Phone?”