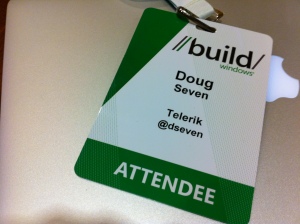 Here I am at the Starbucks in the Marriott Anaheim, which is connected to the Convention Center where Build will take place beginning tomorrow. Already people are milling about and I’ve seen a few friends and former colleagues (in fact, Dave Mendlen, my old boss, and the new CMO for DevExpress, gave me a ride from the airport). There’s a bit of buzz in the air, but also still a lot of uncertainty.

With all of the leaks there have been, it seems the more connected people have an idea of what will be said tomorrow, although they are still unsure what it will really mean. It seems the confidence in Microsoft will not come from them getting into the touch-centric user experience model, nor from a light weight, long-battery life tablet/slate form factor (such as implied by the Windows 8 on ARM announcements at the last CES). The confidence will come from implementation. How well can Microsoft enter this space, or how badly can they mess it up. Those seem to be the two camps.

A lot of folks I have spoken with don’t think Microsoft has the ingenuity to get into this game the right way. Perhaps its from years of tablet devices that were merely laptop PCs that could be used with a stylus. On the goos side for Microsoft, that means the bar is relatively low – simply don’t screw up and whatever else you do will be acceptable.

On the other hand, I know a number of people who believe Microsoft is going to do what Microsoft historically has been good at – enter late and envelop the market. We’ve seen this with the OS wars of the early to mid 90’s, the browser wars of the late 90’s and even the game console market in the 00’s. Unfortunately we have yet to see this with the smartphone market, where Microsoft is still effectively in last place.

Personally I am a believer. I think we will see and hear things tomorrow that will wow us, make us curious, and inspire us to learn a new way of programming for the Microsoft stack. I am not without concern, however. There are plenty of ways Microsoft can mess this up, but I don’t think they will. I believe that Sinofsky and the Windows team have been working diligently to make a compelling experience for Windows developers, such that it may even do what they want mosts, and attract non-Windows developers to the platform. I also think the Developer Division has been working hard to create a compelling tooling environment for the platform. I think most people will be happy with what they see….it just may take a few days.

Telerik is here at Build, but we are here mostly as attendees. We are hear to hear from Microsoft and learn from Microsoft. Our goal is to provide great additions to the Microsoft development tools, through UI controls, additional productivity tools, and whatever else may be appropriate. Of course we could come to Build and totally blend in, so if you are here, look for us and ask for a t-shirt. In fact, Tuesday morning, look for me driving the .NET Ninja Mobile (a Lamborghini with the Telerik logo) and take and post a picture of yourself with me and I’ll give you a t-shirt and a coveted pass to the GeekFest party on Thursday. If you need a ride to the conference Tuesday morning, send me a direct message on Twitter (@dseven) and I’ll come pick you up and drop you off in style.